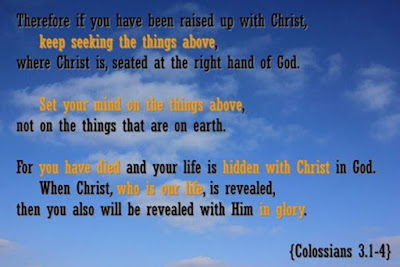 By Dave Hunt
Torn between their sincere desire to serve and honor their Lord and the inner turmoil of fleshly lusts and the seductive pull of worldly pleasures and honors, many Christians struggle to live for Christ. For them, Christianity involves great effort, little joy, much frustration and disillusionment, and the loss (when they have enough will power to deny themselves) of so much they once enjoyed in life. They struggle to avoid Paul’s list of “don’ts” in Colossians:3:5-8

;16:2;17:14). By His cross we have been cut off from this world just as surely as He has been.
Death, however, did not end it all. Christ rose triumphant from the grave and ascended to the right hand of the Father in heaven. Moreover, He is coming again in power and glory to judge and take vengeance upon those who have rejected Him—and we, who have identified ourselves with Him in His rejection and death, will participate in His triumph and glory. Nor is that Second Coming so far in the future that it has no practical meaning for us now. On the contrary, it could occur today. The glorious fulfillment of the hope that the gospel has instilled within our hearts could burst upon us at any moment! This fact causes eternity to invade the present and makes the Christian no longer of this world!
Hear Paul say it again: “For ye are dead, and your life is hid with Christ in God.” Consenting to be dead and willing for Christ to be their life was not only the Colossians’ basis for victory but the essential meaning of the gospel they must embrace. Otherwise, there could be no salvation. Without that, they were mere Barabbases, grateful that Christ had died in their place but mistakenly assuming that they had been “saved” in order to live for self. If they were not willing to acknowledge Christ’s death as their very own and to give up life as they would have lived it so that Christ could become their life, then they could not experience the victory over sin and self that Paul preached. Indeed, they had not consented to the message of the gospel at all!
And what made the fact of their death, burial, and resurrection with Christ the dynamic power that transformed their lives? It was this promise: “When Christ, who is our life, shall appear, then shall ye also appear with him in glory.” Once that truth had gripped their hearts so that His “appearing” had become their daily expectation and hope, Christ’s death and resurrection were so real to them in the present that they were changed into new persons. As such, Paul told them, they were to “seek those things which are above, where Christ sitteth on the right hand of God. Set your affection on things above, not on things on the earth.” May we each pursue that challenge wholeheartedly!
The “pretribulation Rapture” is thus no mere hair-splitting thesis for theologians to discuss, nor is it a theory without practical effect. It is the overlooked secret to victory in the Christian’s life. John said, “Every man that hath this hope in him purifieth himself, even as he [Christ] is pure” (1 Jn:3:3). Paul indicated that it had been his love of Christ’s appearing that had motivated him to holiness and faithfulness and had made him victorious—and that the same “crown of righteousness” was for “all them also that love his [Christ’s] appearing” (2 Tm 4:8). On the other hand, Christ associated wickedness with failing to love His appearing: “But and if that evil servant shall say in his heart, My lord delayeth his coming; and shall begin to smite his fellowservants, and to eat and drink with the drunken...” (Mt 24:48,49).
Let us diligently and enthusiastically “seek those things that are above, where Christ sitteth on the right hand of God.” Let us “set [our] affection on things above, not on things on the earth.” Why? “For our conversation [citizenship] is in heaven; from whence also we look for the Saviour, the Lord Jesus Christ: who shall change our vile body, that it may be fashioned like unto his glorious body, according to the working whereby he is able even to subdue all things unto himself” (Phil:3:20-21
). Praise God!  TBC

Posted by Brian Farrell at 12:39 PM No comments: