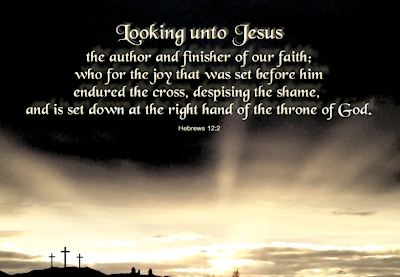 "Because for Your sake I have borne reproach; shame has covered my face. I have become a stranger to my brothers, and an alien to my mother's children; because zeal for Your house has eaten me up, and the reproaches of those who reproach You have fallen on me. Let not the floodwater overflow me, nor let the deep swallow me up; and let not the pit shut its mouth on me. You know my reproach, my shame, and my dishonor; my adversaries are all before You. Reproach has broken my heart, And I am full of heaviness; I looked for someone to take pity, but there was none; and for comforters, but I found none. They also gave me gall for my food, and for my thirst they gave me vinegar to drink. But I am poor and sorrowful; let Your salvation, O God, set me up on high."
(Ps 69:7-9, 15, 19-21, 29)

Do you hear the Lord’s voice in these verses? Read them again, this time remember that this is a prophecy about the crucifixion of Jesus and His resurrection and ascension to the right hand of the Father on high. Jesus, the Eternal Son of God, spoke these words prophetically through King David, around 1,000 years before He became a man to die for our sins and rise for our eternal life!

Verse 21 is referred to in all four Gospels. Again, verse 21 says,

“They also gave me gall for my food, and for my thirst they gave me vinegar to drink.”

Matthew tells us, “... they gave Him vinegar mingled with gall to drink. But when He had tasted it, He would not drink. Immediately one of them ran and took a sponge, filled it with sour wine (vinegar) and put it on a reed, and offered it to Him to drink (Matthew 27:34, 48).”

Mark, Luke and John all record the same event.

So, this paints some of Psalm 69 in another light. Yes, David is, in much of the Psalm, speaking about circumstances in his own life. But, this also is prophetic of the circumstances in Jesus’ life. Jesus even speaks through David about Himself and about elements that only apply to Him!

Let’s look at the Psalm a little closer.

“Because for Your sake...” Jesus did everything in accordance with the Father’s will and for His sake.

“I have borne reproach; shame has covered my face.” In Hebrews 12:2 it says, “looking unto Jesus, the author and finisher of our faith, who for the joy that was set before Him (our salvation) endured the cross, despising the shame, and has sat down at the right hand of the throne of God.”

“I have become a stranger to my brothers, and an alien to my mother's children;” Jesus was not recognized by his ‘brothers,’ His own people, the nation of Israel. And His own brothers and sisters in His family rejected Him until after the resurrection.

“and let not the pit (the grave, death) shut its mouth on me.” This prayer was answered, the grave could not hold Him! Jesus was “declared to be the Son of God with power according to the Spirit of holiness, by the resurrection from the dead (Romans 1:4).” And an angel told the women at the empty tomb early resurrection morning, “He is not here; for He is risen, as He said (Matthew 28:6).”

“let Your salvation, O God, set me up on high.”

“No one has ascended to heaven but He who came down from heaven, that is, the Son of Man who is in heaven (John 3:13).”

“Jesus said to her, "Do not cling to Me, for I have not yet ascended to My Father; but go to My brethren and say to them, 'I am ascending to My Father and your Father, and to My God and your God (John 20:17).'”

“Therefore He says: "When He ascended on high, He led captivity captive, And gave gifts to men (Ephesians 4:8).”

“He who descended is also the One who ascended far above all the heavens, that He might fill all things (Ephesians 4:10).”

“Now it came to pass, while He blessed them, that He was parted from them and carried up into heaven (Luke 24:51).”

“Now when He had spoken these things, while they watched, He was taken up, and a cloud received Him out of their sight (Acts 1:9).”

Jesus has ascended and been “set up on high,” “Christ who died, and furthermore is also risen, who is even at the right hand of God, who also makes intercession for us (Romans 8:34).” He will be there until the Father “makes His enemies His footstool,” which is apparantly about to unfold shortly on planet earth!

Posted by Brian Farrell at 12:56 PM No comments:

Love One Another Fervently With a Pure Heart

Since you have purified your souls in obeying the truth through the Spirit in sincere love of the brethren, love one another fervently with a pure heart, having been born again, not of corruptible seed but incorruptible, through the Word of God which lives and abides forever (1 Peter 1:22-23).

In verses 2-5 of this first chapter of Peter's first epistle, Peter seems to recall Jesus' words recorded in John 14:1-6. And in our present text, do verses 22 and 23 recall the Lord at His last supper with the disciples, recorded in John 13:1-17?

Peter says to the sojourners of the dispersion, "You have purified your souls in obeying the truth through the Spirit." In John 13:10 Jesus said to Peter, "he who is bathed needs only to wash his feet, but is completely clean; and you are clean..."

Peter then says, "through the Spirit in sincere love of the brethren, love one another fervently with a pure heart..." So too Jesus, after washing the disciples feet says, "If I then, your Lord and Teacher, have washed your feet, you also ought to wash one another's feet. For I have given you an example, that you should do as I have done to you. If you know these things, blessed are you if you do them." And in John 13:34-35 he says, "A new commandment I give to you, that you love one another; as I have loved you, that you also love one another."

Oh, Lord, empower us to love as you have commanded. Let us see through any differences within the church and let us see each other with your eyes. Fill us to overflowing today with your Holy Spirit, to share your love with the world and that the world may know that we are your disciples, because of the love we have for each other. Amen.
Posted by Brian Farrell at 10:08 AM No comments: