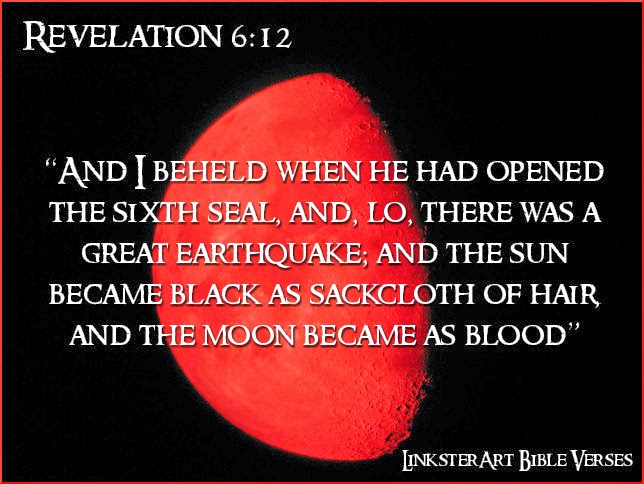 Blood Moon? No Big Deal!...Every few years some well-meaning Christian pops up with the latest Bible "proof" that the world will end, or Rapture will happen, on a certain date. Of course, the date comes and goes, and nothing happens. These date-setters do great harm to the Body of Christ, and are poor witnesses to the world about what Christianity is really about. And they ultimately look like fools while giving great fodder to the enemy.

Also in the 1970s, Joseph Calhoon from California caught a lot of media attention because he had studied the Egyptian Pyramids extensively and concluded that the inside passages were a timeline sign from God and that the Lord would return in 1979. And nothing happened. In the 1980s the book "88 Reasons Jesus Will Return in 1988" was released, written by Edgar Whisenant. He was so convinced he was 100% correct that he said on national television, "If the Lord doesn't return in 1988, the Bible is wrong." And nothing happened. Whisenant died in 2001.

Then we had Y2K...And, as before, nothing happened. Then there was Harold Camping, a radio host who first predicted Jesus would return in 1994, then changed it to May of 2011, and finally changed it to October of 2011. And nothing happened. Camping did learn great truths this past December when he passed away (as we all will). That brings us to the latest scripture-light theory called The Blood Moons.

Mark Biltz, a pastor in Washington State, first began pushing this bunk to unsuspecting Believers a couple of years ago. Biltz is apparently not a dispensationalist and thus horribly misapplies several Old Testament scriptures to make his theory plausible. John Hagee, who has a couple of doctrinal challenges of his own, has taken up the Blood Moons banner with a best-selling book on the subject, "Four Blood Moons."

Biltz's date-setting theory is based on Joel:2:31: "The sun will be turned into darkness and the moon into blood before the great and awesome day of the LORD comes." Biltz takes Joel:2:31 to be referring to solar and lunar eclipses. When he compared previous eclipses on NASA'a website (it lists all the lunar eclipses from 2000 BC to 3000 AD), he honed in on the lunar tetrads, a rare series of four lunar eclipses in a roughly two-year time period.

Biltz noticed that some of these tetrads fell on past Jewish Feast days and also around the time of some significant Jewish historical events. Biltz then noted that the tetrad appearing in 1493-94 was connected to the time of the great persecution of Jews in the Spanish Inquisition between 1478 and 1534.

Problem #2: When you compare other verses that also discuss the sun, moon and stars at the end of the age there are other events that coincide with the moon turning to blood.
"I looked when He broke the sixth seal, and there was a great earthquake; and the sun became black as sackcloth made of hair, and the whole moon became like blood; and the stars of the sky fell to the earth," Rev:6:12

"But immediately after the tribulation of those days THE SUN WILL BE DARKENED, AND THE MOON WILL NOT GIVE ITS LIGHT, AND THE STARS WILL FALL from the sky, and the powers of the heavens will be shaken" (Matt:24:29).

Problem #3: Some 40% of the previous tetrads did NOT coincide with Jewish Feast days or major events in history. So how would you know if the next upcoming tetrad had any significance?
Problem #4:The tetrads that DID match up (Inquisition, Jewish Independence and recovering control of the Old City of Jerusalem) actually happened months or years after the events. So not much of a warning there!

Should we expect God to be in the business of "loosely predicting" the future? When you consider God gave Israel the EXACT DAY the Messiah would come into Jerusalem, in writing, 173,880 days prior, this Blood Moon theory seems pretty lame.

There ARE a lot of prophetic signs being fulfilled in our lifetime. But there's no Biblical basis for tying the Blood Moons into predicting the return of Jesus--they mean zilch!