Oh, How Blissfully Happy! A Commentary on Psalm 32:1-2 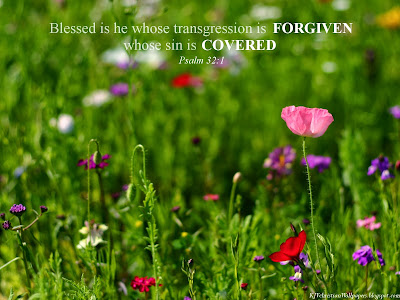 Psalm 32 is a Psalm of thanksgiving. It is a “Mashcil,” which means to give instruction or to understand; a contemplation. The Hebrew word translated “blessed” could be translated “Oh, how blissfully happy!” Spurgeon noted that this blissful peace came after David’s confession of sin, recorded in Psalm 51. For the full context of Psalm 32, read 2 Samuel 11 & 12 and Psalm 51 first.

“Blessed is he whose transgression…” Transgression is rebellion, a willful and knowledgeable crossing of the line.

But the “transgression is forgiven”, that is, lifted up and carried away like a burden.

“Whose sin…” Sin is failure to keep God’s law. The Greek word translated sin in the New Testament means to miss the mark.

But the “sin is covered,” that is, blotted out from the sight of the divine Judge.

“Blessed is the man to whom the Lord does not impute iniquity.” Iniquity is a crookedness or deviation from the right path, a twisting and a going astray.

“Blessed is the man in whose spirit there is no deceit” is speaking of self deceit. There is no self deceit because he has faced up to his sin (cf. v 5).

Christ’s atonement is the propitiation, the covering, the making an end of sin. It’s interesting that the Hebrew word for cover is sometimes used for concealing. Sin cannot be covered by God until man uncovers it. This is a bit of a play on words. The man who does not attempt to conceal his sin, but confesses to God that he is a sinner, finds that it is covered by God through faith in Christ’s atoning death. David is here expressing the happiness of the person whose sins have been confessed to God and forgiven by His great mercy. “Many sorrows shall be to the wicked; But he who trusts in the LORD, mercy shall surround him (Psalm 32:10).”

Paul quotes Psalm 32:1-2 in Romans 4:5-8. In Romans 4, Paul gives Abraham, and then David, as examples of those forgiven by God before and after the law was given. Paul used these scriptures as evidence that one is forgiven by God through faith, and not by works. “For by grace you have been saved through faith, and that not of yourselves; it is the gift of God (Ephesians 2:8).”

Paul finishes Romans chapter 4 with this, speaking of Abraham, “And therefore ‘it (Abraham’s faith) was accounted to him for righteousness.’ Now it was not written for his sake alone that it was imputed to him, but also for us. It shall be imputed to us who believe in Him who raised up Jesus our Lord from the dead, who was delivered up because of our offenses, and was raised because of our justification (Romans 4:22-25).”

It is so important for us, as Christians, to keep this doctrine close to our hearts at all times, for the rest of our lives. To walk, day in and day out, in the light of the grace of our God, our Heavenly Father. This is the Good News of God’s grace for a dying world, and it is our joy, our hope and our strength until the Lord calls us home. Oh, how blissfully happy that person is, who has had their sin removed, and who now has the righteousness of Christ imputed to them through faith, because of what our Creator has done for us and His lovingkindness that endures forever!

For the full commentary on Psalm 32, visit http://walkingwithjesus.net/vbv.html

Posted by Brian Farrell at 1:41 AM No comments:

You Must Be Born Again

"Do not marvel that I said to you, 'You must be born again.' (John 3:7)Being saved is an idiom for being born again and filled with the Holy Spirit. What are we being saved from? All people have fallen short of the glory of God and are sinners. God is perfect and we are not. Because of His perfect justice, sin must be punished. The wages of sin is death. But God loves the world so much, He became a man and died for the sins of the world. The eternal Son of God was born of a virgin. He is Jesus of Nazareth. Jesus lived a sinless life, the God-man, the Son of God, completely obedient to God the Father. He then willingly went to the cross, despising the shame of it, and took the sin of the world upon Himself.He willingly laid His life down and went to the cross because of the joy of knowing that because of the cross, anyone that loves Him and believes in Him will have eternal life, and not spend eternity separated from God because of their sin.How can our sin be laid on Him and His righteousness be imputed to us? The biblical answer is, "not by good works, but by faith." Only the grace of God can give us the free gift of forgiveness through Jesus Christ, and eternal life in Him.Sincerely repent (turn from) your sin today, and truly believe in the Lord Jesus Christ in your heart, and you will be saved, born of God. To know God and enter Heaven, all must be born again, born of the Spirit, united to God through faith in Christ. Turn from your sin and ask Him into your heart today.


Posted by Brian Farrell at 5:44 AM No comments: